Skip to content
You are here:Home » How pioneering its peers has boosted JPS Construction and Design’s approach to project-builds
Custom building Insights
6 min read

Birthed from a partnership in 2012, but technically operating since 2006, JPS Construction and Design (JPS) deals with a variety of residential and commercial customers – all hooked by its niche approach to design-build based construction. As Jamie Stebenne, President, explains: “The design component of our business has grown a lot over recent years. We are seeing more of our customers leaning towards the direction of design-build, and I think that is our competitive edge.” 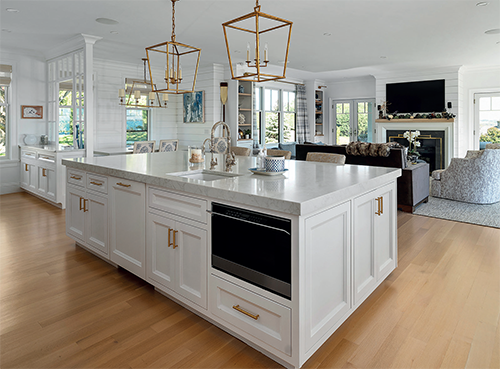 The design-build model simplifies project delivery for the consumer and offers a more collaborative experience for all parties involved. Instead of liaising between a separate architect and contractor, a single entity is responsible for both elements of the process. Ultimately, this provides a clearer path to recommendations with regards to work-schedules and budgeting. “A lot of people really value having one point of contact who manages the design and engineering components,” Jamie continues. “And our ability to bring in our project manager early on, so they are already familiar with the schematics before the build starts, allows us to collectively work on the design before proceeding from a construction-project-management standpoint.”

This passion for design is not only set in the company’s foundations, with Jamie studying architecture at school and subsequently employing a number of his classmates, the focus has also shifted with greater experience in the field – in the name of protecting its customers. “A lot of jobs we were bidding on were relying on plans from separate architects, and every contractor was coming in over the budget,” expresses Jamie. “The contractors then have to revalue the engineering side, the architect is aggravated because they have to return to the drawing board and then the homeowners are frustrated because their resulting property has changed. It’s hard to go back once you have envisioned it a certain way, so we try to eliminate that occurrence.”

Collaborative construction
JPS has prioritized the development of its design component to the degree it now creates two estimates for each project: one for the design and one for construction. With this bespoke technique to establishing a new job, the team’s lead designer and the project manager will arrange an initial meeting with the prospective client to take down their ideas and sketch out a scope of work – before returning with the two estimates for their consideration. This opens JPS up to offering out its design services as a single entity, whilst simultaneously allowing its customers the freedom to take their plans elsewhere if they receive a more attractive bid for the construction itself.

However, Jamie believes that the JPS method wins over its clientele: “During the process they build a relationship with us and our project manager, which streamlines the construction side. If their quoted estimates are too high, we will adjust the scope of work based on their feedback. After we’ve reached an agreement, they then sign the design contract and work onwards with the design team. Once the plans are completed, the vast majority of our clients will ask for a final estimate so we can move forward with the construction.” 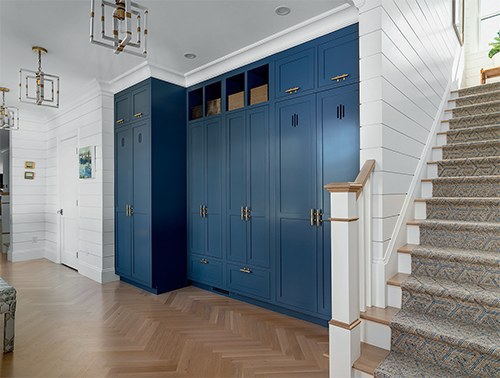 JPS’ consideration for customer satisfaction aligns with the design-build industry’s nature of collaboration: working closely to create somebody’s vision for the perfect home. A prime example of this is the recent completion of its Sea Stones project in Portsmouth, Rhode Island. “We have a small number of projects each year with an investor on spec and we were working on the design of an existing house at Sea Stones, in a very desirable area. We put up a sale sign out front once we were getting weather tight and the buyer came along shortly after.” Jamie speculates. “As from that point onwards we were working side-by-side with the owner to tailor it more in-line with their needs. This included a further 900 square feet of finished space in the basement that we hadn’t initially considered developing in such a way.”

Dominic Skrajewski, Project Manager, continues: “We used some of the additional features to take advantage of the nooks and crannies, such as a sewing room in the attic and a built-in playhouse in the basement for grandchildren. It was fun having them come onboard and introduce these extra details for the house to stand out.”

The personal touch
The homeowner also employed Donna Benedetto, an interior designer who they had worked with on previous properties in Connecticut, to add a personalized touch to the proceedings. “When I came to see the house, they were finishing up the exterior and the interior was basically a shell – so we had free rein to go in and do anything we wanted,” Donna highlights. “My client and I worked in a collaborative way to decide on the overall feel of the house. We did all the mill work and chose the flooring and cabinetry, among the other interior details of the house, and then passed them off to JPS for execution.”

Beyond its customer relations, JPS prides itself on its treatment of subcontractors and venders. The company has succeeded in remaining loyal to many of its industry peers whose businesses have grown in parallel over the years. “We don’t waste their time by having them bid on every job, we try to say: ‘hey we want your price for this project’ and unless it looks out of whack, we will use them,” says Jamie. This casual manner is abandoned when it comes to paying outwards, as it aims to pay all subcontractors in a quick, timely fashion. “As for lumber yards, we have always had good relationships with them. By staying close knit, we know their bosses are doing all they can to ensure deliveries are prompt and correct,” he concludes. This pioneering of people, along with taking time to appreciate their wants and needs, continues to open doors for JPS as the company ploughs on through the field of construction in Rhode Island, with its personalized touch.
www.jpsconstdesign.com