During its lifetime, Coastal ICF has completed hundreds of ICF building projects across Florida, utilizing innovative engineering techniques to push beyond the limitations of other construction methods

Proudly calling Dunedin, Florida, its home, Coastal ICF Construction specializes in ICF structures and buildings. ICF is an acronym for Insulated Concrete Form, an expanded polystyrene modular building form made for erecting super insulated steel reinforced concrete walls cost effectively. Designed to be put in place quickly, ICF blocks are structurally strong enough to withstand the fluid pressure of the concrete that is poured inside to fill up the wall. 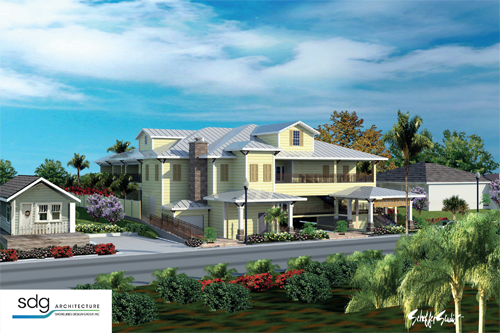 Coastal ICF began operations building custom ICF homes from the ground up in 2009, led by its Managing Partner, Doug Anderson. Today, the company is predominantly active in the Tampa Bay Region, also constructing projects on the North Gulf Coast in the Florida Panhandle, where it boasts a stellar reputation for producing ICF projects, both commercial and residential, that include the entire envelope of a building. Its approach streamlines the construction process by using its own full time professional crew to complete the three critical structural phases, framing, ICF installation, and the pouring of the walls thus providing more effective cooperation between owners, architects, engineers, sub-contractors, and construction officials.

“ICF is by no means a new technology. It has actually been present in our industry for a number of years, albeit mostly used in commercial applications,” begins Doug Anderson, Managing Partner – Development & Construction – of Coastal ICF. “What we learned about ICF was that it is a product that we could use to not only differentiate ourselves from our competitors, but to also bring greater value to our clients.”

So impressed and confident in ICF’s ability to boost the profile and scope of the business Doug enrolled in formal education to first became certified as an installer of the technology to understand and gain knowledge of every small detail of its installation. “To someone who may be less familiar with the inner workings of ICF, it may seem fairly straightforward to utilize, but the truth is it is anything but,” Doug notes. “There is certainly a right way and a wrong way to install and make the best use of ICF, and we have worked hard to ensure that all our crews are certified in installation so that we can self-perform all our ICF scope to the very highest standard.”

This leads us to ask Doug to detail what he considers some of the primary benefits of ICF. “For me,” he notes, “Mother Nature will always be the greatest tester of our high-performance wall systems. Florida is no stranger to severe weather events, and on Wednesday, October 10th 2018 the area in which we operate was subjected to the impact of Major Category 5 Hurricane Michael. At the time, we had no fewer than 15 structures in place in what is known as the Eye Wall of the hurricane, where wind speeds of over 200mph were recorded, and all of these came through with zero structural damage. There was even one home built on Mexico Beach that we acted as the general contractors, which came to be dubbed ‘The Miracle Home’ by sections of the media, as it ended up being the only standing structure amidst blocks of badly damaged and totally destroyed buildings.”

Multiple benefits
In addition to being hurricane resistant, ICF walls also boast superior properties when it comes to fire resistance – as they are built with steel reinforced concrete and fire retardant-treated expanded polystyrene foam. The other benefits are sound resistance, and superior energy efficiency, with ICF structures nee only around 30 percent of the energy required by conventional structures to heat and cool.

When it comes to what a finished ICF structure looks like, the answer is like any conventional building, both on the inside and the outside. The only noticeable difference is the window sills, which are deeper due to the thickness of the walls. “The biggest trait that all of our completed projects have provided to our clients over the years is that the structures have never 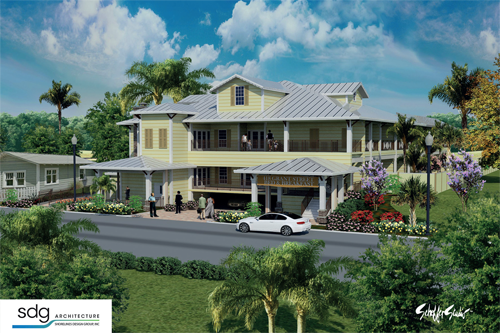 disappointed, whether when it comes to withstanding the test of Mother Nature or delivering huge energy consumption savings,” Doug enthuses.

“In the past, we focused predominantly on high-end, single-family, residential beach-side homes, working with a number of leading developers active throughout the Florida Panhandle,” Doug adds. “Even though we have since moved our operations mostly to the Tampa Bay area, we continue to do a significant number of projects in the upper Gulf Coast. These include ‘mini hotels’ if you will, ten bedroom, ten bathroom, beach front rental residences for a respected developer/operator.

“We are also very active in locations such as Apalachicola, Florida, where we are currently working on an addition to the 114-year-old the Gibson Inn hotel. This new addition will be built with ICF, but will retain the same elegant Victorian style that the property has had since it was originally built in 1907. On Cape San Blas, we will have another hotel under construction in 2022 for the same owner/operator of the Gibson Inn. We are also currently in the process of finalizing arrangements with Hilton to build a fully ICF, 100 percent solar powered self-sustainable 87-room hotel in Mexico Beach.”

Dunedin, Florida, is another location to have been blessed with a number of Coastal ICF projects. These include the completion of the Mira Vista Phase One town home Project, a community of new ICF constructed town homes that overlook the Intracoastal Waterway, and its forthcoming work on the second phase, consisting of eight 3000-to-3500-square foot ICF residential units.

Dunedin is also home to several commercial projects that are making impressive use of solar and other renewable energies, as Coastal ICF strives to deliver 100 percent sustainable developments. Examples of such undertakings include the Grant Street Inn, which will be a fully sustainable, 22-room all suite boutique hotel, and the J Hotel, an ICF, 100 percent solar powered sustainable project on the Dunedin Causeway.

If the list of projects detailed above were not proof enough, Doug goes on to admit that the company currently finds itself working harder than ever before, and part of that is due to the ongoing effects the Covid-19 pandemic has had on things like material availability and costs. “We presently have a situation where we are never completely sure which product or what materials are going to be in short supply or on back order week-to-week,” he confirms. “Some of the higher-spec items that we rely upon here in Florida, such as impact rated glass for windows and doors, that we would normally get in approximately six weeks are now taking months to arrive, while prices of materials like lumber have increased significantly.”

Fortunately, Doug is confident that markets are slowly moving back towards more normal levels. With that in mind, Coastal ICF continues to focus its efforts on delivering its considerable list of projects. “We are of course looking forward to completing our various hotel projects, as well as our town home projects across the region,” he says. “From there, we will be moving into the field of delivering independent living and assisted living projects. With these facilities, especially along the coast, regulators are increasingly looking at how to make these ‘shelter-in-place’ locations in the event of a storm. With our ICF solutions, which we know can withstand the force of a hurricane, and our approach to building in areas that are high and dry and not in known flood zones, we wholeheartedly feel that residents of a property built by Coastal ICF, as well as their families, will enjoy great peace of mind from living in one of our 100 percent sustainable builds.”

With almost one million people a year re-locating permanently to the state of Florida, a significant percentage of which are at, or nearing, retirement age, Coastal ICF is right to be targeting sectors like the aforementioned independent and/or assisted living arena or the steadily growing adults-only apartment complex market. “With Florida now recognized as the third most populous state in the US, it feels like a natural progression for Coastal ICF to be moving into different fields as we look to grow our operations,” Doug declares.

As our conversation draws to a close, Doug returns to one previously highlighted point “We really are extremely busy right now, with each and every member of the team putting in long days in order to complete our projects on-time and to the standards that are expected of us,” he says. “It certainly makes for an eventful and exciting time to be involved with Coastal ICF, and we see no reason why this pattern won’t continue for the foreseeable future!”