Skip to content
You are here:Home » California dreaming
Design Features 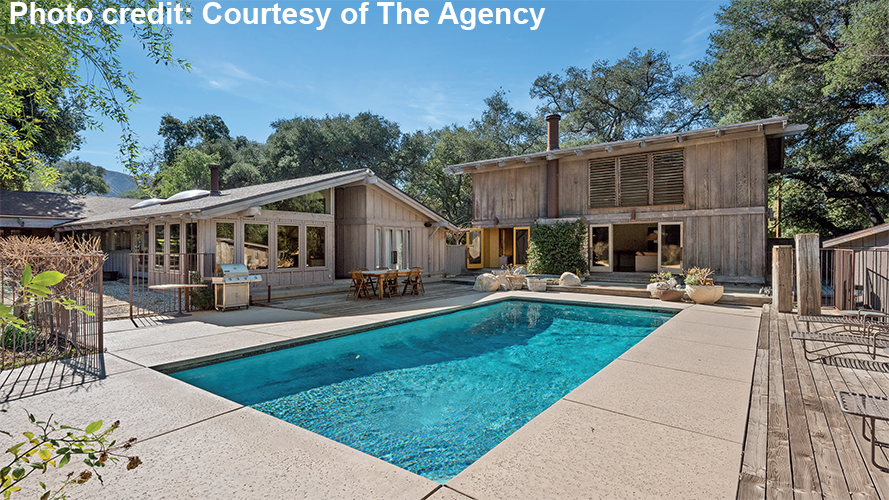 Linda Gray, Emmy and Golden Globe-nominated actress, well known as Sue Ellen Ewing, the vodka-tipsy wife of Larry Hagman’s character, J.R. Ewing, in the long-running television soap opera Dallas, is selling her much-loved Santa Clarita, California ranch where she has lived for almost 50 years. It is priced at $2.995 million.

Adapted to her standards of functionality, Linda has made her Oak Tree Ranch a very easy and comfortable place to live. Like she says, ‘it hugs you with its warmth.’ Linda and her art director husband, Ed Thrasher, actually found the ranch by accident when they were helping friends from Tennessee look for a ranch to buy. The ranch was across the street from the one their friends were viewing and was also for sale. In addition to being a beautiful property, it has many ancient oak trees, which they believed to be over 500 years old. After they bought it, they aptly named it Oak Tree Ranch. At the time, Mr. Thrasher, who designed some of rock’s most famous record albums including Jimi Hendrix’s ‘Are You Experienced’ and Van Morrison’s ‘Astral Weeks,’ was working on a film set project with modernist-architect A. Quincy Jones. Thrasher asked him to come out and include some of his own design ideas.

Built in 1973 and only 35 minutes from Beverly Hills, the gated three-acre equestrian estate has numerous structures and amenities such as stables for horses, a tack room/barn, north-south tennis court, large swimming pool with spa, organic gardens, a koi pond, and even a chicken coop. Between the main house and two-story guest house, there are a total of five bedrooms and four baths tucked into 4,800 square feet of living space. The two-bedroom guest house also has a kitchen and living room. One of Gray’s favorite rooms is the Josh Schweitzer-designed kitchen and another Gray touch is to have fireplaces high enough that they can be seen while lying in bed and also while working at a kitchen counter for the kitchen fireplace. In the many years she has lived in the home, Gray hasn’t missed a detail when it comes to adding day-to-day livability to the house. 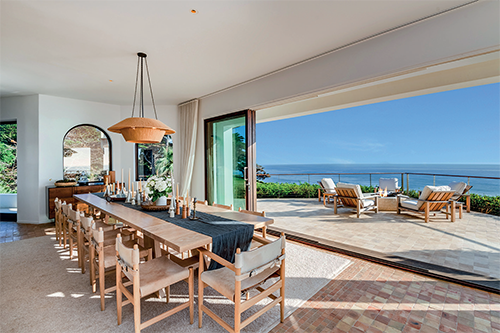 Model Malibu
Cindy Crawford was one of the most popular and well-known supermodels of the 1980s and 90s. She appeared on the cover of over 500 magazines, including Vogue, Elle and Cosmopolitan and walked the runway for such brands as Versace, Ralph Lauren, and Dolce & Gabbana.

A cliffside Malibu estate that once belonged to the supermodel has just been listed for $99.5 million, one of the highest-priced homes in the state. Crawford sold the home for $45 million in 2018. Truly secluded, the mansion sits behind gates on over three acres of manicured grounds above Malibu’s El Sol Beach. A private path leads down to the white sand beach, accessible only to the handful of surrounding mansions that make up the neighborhood. The house has been exquisitely designed to take advantage of the panoramic views of the shore. Mature trees, including palms, surround the house for a serene, natural feel.

A two-story, red-roofed Mediterranean, the residence spans 7,450 square feet. With a chic, airy floor plan, the main floor is complete with a great room combining the living room, den, dining area, and gourmet kitchen. Floor-to-ceiling sliding glass doors showcase the big ocean, beach and coastline views, and open onto the wraparound deck with firepit. The grand master suite includes a fireplace and sitting area, as well as dual spa-like bathrooms and a walk-in closet. The other bedrooms include their own en-suites, with one having a private entrance, bathroom and kitchen. A gym with vaulted ceilings and a media room complete the villa.

Tennis courts, a spectacular pool and spa including a cabana with its own fireplace, and expansive decks provide options for entertaining and enjoying the stellar sunsets for which Malibu is known. Nearby options for entertainment include the Malibu Riding and Tennis Club and the famous Paradise Cove Beach Cafe, with the boutiques and restaurants at the Malibu Country Mart just a scenic 15-minute drive down the coast.

Malibu is just West of Los Angeles and has seen the development of spectacular mansions and upscale shops in recent years. The city is extremely popular with celebrities. Just a few of its notable residents include Leonardo DiCaprio, Miley Cyrus, Jack Nicholson, Paris Hilton, Britney Spears and Cher.